Ear Care
Regular ear cleanings are a necessary part of puppy and adult dog care as this will help to reduce ear infections. A dog’s ear has three major parts which is good to know:

Your dog ears are important as it can provides hearing to about four times the distance of the average human.  The type of ear your dog has also makes a difference. For example, dogs with pricked up, open ears are more reactive to sounds than dogs with floppy, closed ears. In addition, dogs will try to locate the sound or and strange noise by doing the cocked head position with moving ears. With their ears playing an important function, it is important to look after your dog ears.

Dog’s ear problems
Dogs do commonly suffer from ear problems and issues such as ear odour, ear mites, fungi, bacteria, and yeast related conditions. Ear infection are common and can be seen by the redness on the skin either inside or outside the dog’s ear.

A dog with mites is very unhappy and uncomfortable. With mites, you will see a brown, greasy or waxy substance inside the dog’s ears and could comes with a musty smell. These mites burrow into the top layers of the skin, where even a few of them can stimulate a very strong itch response. Common types mites found in dogs are sarcastic mange, demoted and cheyletiella. Dogs with sarcoptic mange can cause them to barely walk, as they keep stopping to scratch.  Demodex is a tiny mite that can be found in dogs and Cheyletielle is a short-lived mite most often seen on puppies.

Fungus in the dog’s ear is most probable due to a fungal problem caused by an overgrowth of the yeast Candidiasis. When Candidiasis proliferates in the gut, this will lead to an overgrowth that turns up in the ears.  If you notice the above signs or symptoms, do seek treatment immediately as ear conditions can be very painful and can cause long-term problems.

Dogs that swim often may have water left in their ears, which is another potential source of ear problems. Dogs with allergies can also have recurrent ear infections.

Parasites, tutors of the ear canal, trauma, ruptured eardrums, and certain skin disorders, such as seborrhoea, all can contribute to ear problems as well.

Checking for Healthy Ears
At least once a week, check the inside of your dog’s ears. Your dog should exhibit no discomfort when you touch its ears. Ensure that there is no swelling of the ear flaps and you should see a clean visible ear canal. It should have a clean, healthy doggy smell and free of bad odours.   Honey-colored wax in the ear is normal, but a a dark crusty substance might indicate problems, such as ear mites. Others signs that indicate that your dog has an ear problem includes

Ways to prevent an ear infection:

Cleaning Your Dog’s Ears
The suggestion is not to place or force the tip of the bottle into the ear canal, as there is the risk of rupturing the dog’s eardrum. Instead, gently massage the base of the ear to distribute the ear wash, then wipe the inside of your dog’s ear flap using cotton ball. As such, only clean the ear flap that you can see. Do not stick pointed objects or cotton swabs into the ear canal as this could risk injuring your dog’s eardrum. 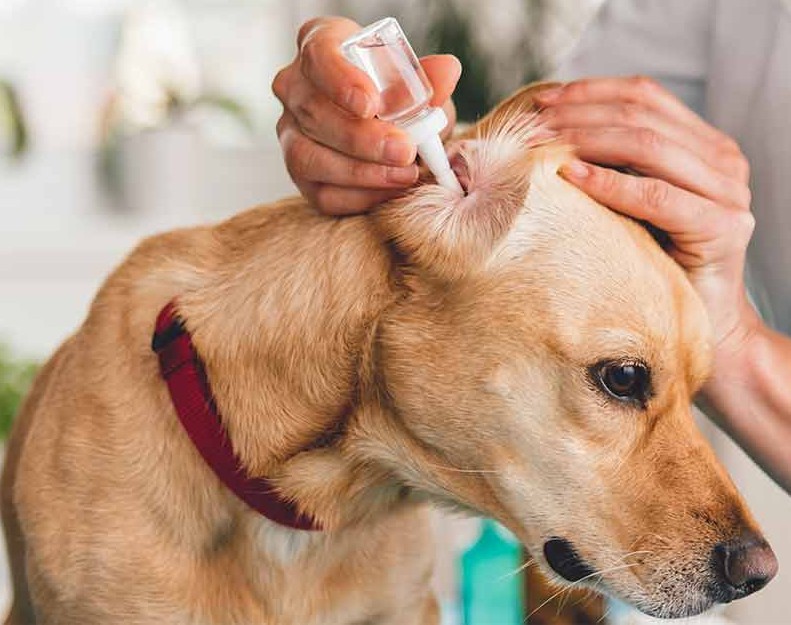 An effective and gentle dog ear cleaner can help to remove the odor, dirt, excessive wax, bacteria and pathogens that in your dog’s ear. It is recommended to use it for routine ear cleanings so as to maintain and keep your dog’s ears clean and your dog happy.

We have selected some of the best dog ear cleaners below for your consideration and selection.

If you want good recommendation on the best best dog ear cleaning solution do check out the following: 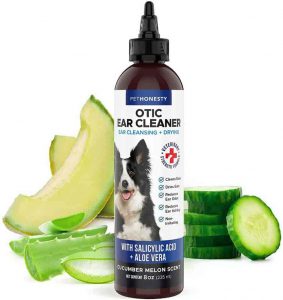 How do I clean my dogs infected ears?

Ear cleaning for your dog is recommended as this will prevent dirt build up which can lead to ear infections. To clean your dog ears, squeeze the ear-cleaning solution into your dog’s ear canal and massage gently the base of the ear for about 30 seconds. After awhile, your dog will shake his head after which you can wipe the dislodged debris from the ear canal opening using a cotton ball or gauze.

What is a good natural ear cleaner for dogs?

As ears have very sensitive tissue, it is good to use a natural  ear cleaner that is safe and gentle for your dog’s ear. This means that the ear cleaner should not sting, burn or aggravate the ear canal.  Please note Hydrogen Peroxide should not be use as it could damage the ear.

What is the brown stuff in my dog's ears?

Your dog healthy earwax should have a pale, yellowish colour.   If there is brown stuff or earwax it is abnormal and could be a sign of an ear infection.  Some dogs are more prone to infection as a result of excessive swimming while some are prone due to the shape of their ears and hair growth in ear canals.

What is the black stuff in my dog's ears?

The black stuff or dark, red brown crusts from the dog ear is typically composed of dried blood.  This is a symptom of the presence of dog ear mites.  As ear mites are highly contagious, dog could get them by spending time in close physical contact with other animals who have ear mites. Deep cleaning of the dog’s ear to flush out the mites is the first step in treating this condition.

Can I clean my dog's ears everyday?

Some dogs secrete more earwax and sebum than others. Other could have more hair inside the ears. Typically, you can clean your dog’s ear at least once a month for most dog’s with normal ears. If your dog swim a lot, then more frequent cleaning is recommended.